Here’s Everything You Need to Know about Peronism (and Trump)

SinceI called Trump a big-government Republican during the 2016 campaign and just condemned his capitulation to a spendaholic budget deal, it goes without saying that I’m not a huge fan of the President.

Heck, I also recently criticized his protectionism, warning that additional barriers to trade could offset the pro-growth effect of lower tax rates.

But I like to think I’m fair in my criticisms. I stay away from the personal stuff (other than for humor purposes) and simply focus on whether liberty is increasing or decreasing.

Today, though, I want to quasi-defend Trump because a professor from the University of Richmond wrote a really strange column for the Washington Post with a very bizarre assertion about Juan Perón, the populist post-World War II president of Argentina.

It’s en vogue for enraged liberals to compare Trumpism to Argentine Peronism, wielding the analogy as a warning about the potential apocalypse that they fear is about to engulf us. …Like so many familiar historical cliches, however, this one is incomplete, if not downright wrong.

The professor who wrote the piece, Ernesto Semán, wants us to believe Perón is someone to admire, sort of the Argentinian version of Bernie Sanders.

…the core of Peronism was a vision that is the exact opposite of Trumpism. Peronism led a process of expanding economic equality, collective organization and political enfranchisement. …Juan Perón presided over a process of massive wealth redistribution on behalf of the emerging working classes. …his government increased its intervention in the economy and provided…free public health care and education for everyone, as well as a wide array of union-managed social services. Peronism enacted strong regulations on private capital… Argentina’s social transformations resembled in some ways those that took place in the United States during the New Deal. Perón certainly thought so…in 1946 he quoted entire paragraphs from President Franklin Roosevelt’s second inaugural address.

And he says that today’s Democrats should embrace Perón’s policies.

…comparison of Trumpism to Peronism…ignores how in fundamental ways the two are polar opposites… Instead of fearing Latin American populism, …Democrats should look to it as offering a potential path forward for a more equal and fair country.

Wow. This isn’t quite as bizarre as arguing that Venezuela should be a role model (looking at you, Bernie Sanders, Joe Stiglitz, and others), but it’s close.

Here’s everything you need to know about Peronism, from a 2014 article in the Economist:

The country ranked among the ten richest in the world…its standing as one of the world’s most vibrant economies is a distant memory… Its income per head is now 43% of those same 16 rich economies… As the urban, working-class population swelled, so did the constituency susceptible to Perón’s promise to support industry and strengthen workers’ rights.

Take a look at this chart from the article showing Argentina’s per-capita GDP relative to other nations. As you can see, the country used to be much richer than Brazil and considerably richer than Japan. And all through the first half of the 20th century, Argentina was not that far behind the United States and other wealthy nations. But then look at the lines starting after Perón came to power in the late 1940s.

In other words, Peronist policies reduced the comparative prosperity of the ordinary people.

Just like similar policies have reduced the comparative prosperity of ordinary people in Venezuela.

What makes these numbers especially powerful is that convergence theory assumes that the gap between rich nations and poor nations should shrink. Yet statist policies are causing the gap to widen.

I put together a chart back in 2011 showing the relative rankings of both Argentina and Hong Kong. As you can see, Argentina used to be one of the world’s richest nations. Indeed, it was the world’s 10th-richest country when Perón took over. And Hong Kong was relatively poor. But look at what’s happened over time. Perón’s statist policies produced a steady decline while Hong Kong’s laissez-faire approach has now made it one of the richest jurisdictions on the planet. 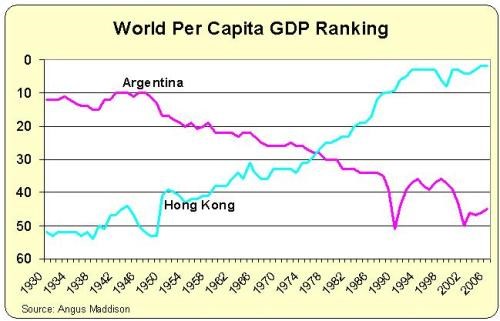 Yet Mr. Semán says we should copy Perón. Go figure.

Let’s conclude by circling back to Trump. Semán is upset because some people are equating Trump (who he despises) with Perón (who he admires).

But since I care about the less fortunate, I have nothing but disdain for Semán’s assertion that Perón’s policies should be adopted in America.

P.S. Given his remarkable level of economic illiteracy, you won’t be surprised to learn that Pope Francis was influenced by Peronism.

Reprinted from International Liberty and FEE

Daniel J. Mitchell is a Washington-based economist who specializes in fiscal policy, particularly tax reform, international tax competition, and the economic burden of government spending. He also serves on the editorial board of the Cayman Financial Review.

Oxfam: Haiti Scandal is Serious, but Left-Wing Advocacy is also a Concern

Mexico, the Dilemma of Voting for a Comedian or an “Alleged” Rapist

Oxfam: Haiti Scandal is Serious, but Left-Wing Advocacy is also a Concern